The Atari Xl line of personal computers did not include a connection from the on-board video chip to the video connector for the Chroma portion of the video, making true s-video output impossible without modification. This tutorial walks you through the Ultimate Atari Video (UAV) Rev. D modification installation.

Background - Why This Mod?

There are several options for updating the video on an old Atari XL computer, including the excellent (but often out of stock) Sophia 2 board, which essentially replaces the entire graphics chip (GTIA) and provides independent RGB/YPbPr/VGA and DVI outputs. The Sophia 2 was out of stock when I set about upgrading my stock 1200XL, so I went with the much more basic but still excellent UAV Rev. D board. I purchased the board from The Brewing Academy, who is the official licensee for the board. Here's what they have to say about the board:

These boards were developed by Bryan Edewaard and sold by him for a long time. He has now sold the rights for the rev. D version to The Brewing Academy and we are producing them for all machines. What does it do?

While, with the right cable, you can connect a stock 1200XL to a more modern LCD monitor, you would need to use the composite connector, which is pretty low quality. This mod will allow connection using s-video (or HDMI, if you have an s-video to HDMI adapter). This is the cable I'm using. It has both s-video and composite, so would also work on an un-modified XL.

A huge shout out goes to several users on the AtariAge message board who posted very helpful instructions and photos on this post, which I used to do my installation. I couldn't have done it without the help of that post. This guide is meant to be a true "idiot's guide" to installing the mod, without having to wade through multiple forum posts, but it wouldn't exist without them.

This is all in addition to an Atari 1200XL Computer (you can find tutorials for other versions of the XL, like the 800XL or 600XL online...they're very similar, with slight changes to where things are soldered), and of course, the UAV Rev. D board.

Step 1: Remove the Case and the RF Shielding

I neglected to take photos of this part, but it's very simple. Below are the written instructions, but the first part of this video (for a different mod, but that doesn't matter) shows you how it's done as well.

Before we continue, here's a photo of the 1200XL motherboard with the locations of everything we're going to do in the next steps annotated. It might be a good idea to open the image up in a new tab and keep it handy for reference.

Step 2: Wire Up the UAV Board and Set the Jumpers 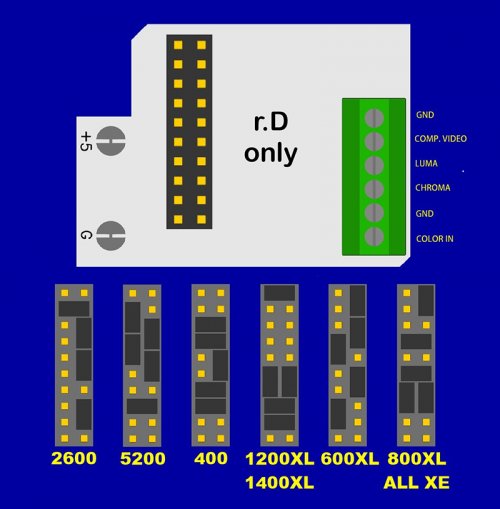 It's much easier to connect the wires to the UAV board before inserting it onto the motherboard. You can see from the annotated photo of the motherboard where each wire will go, so you can tell approximately how much wire to use for each. Cut each wire longer then you think you'll need, just in case. It's easier to shorten a too-long wire than it is to start over because your wire was too short.

To the right you'll see a diagram that shows what each connector in the wiring block is used for, as well as the jumper settings depending on what computer you're upgrading. Be sure to set the jumpers according to the 1200XL section.

It also helps to use different colored wires for each connector so that it's easy to tell them apart later.

Note: the diagram and photo (below) are oriented on their side to make them easier to read. When you insert the board into the motherboard (in a later step), the wiring block will be pointing north. See the previous annotated photo for reference.

Here's a photo of my board with the wires attached and the jumpers set: 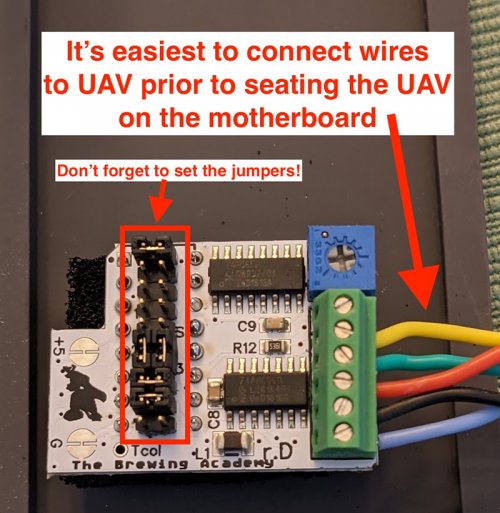 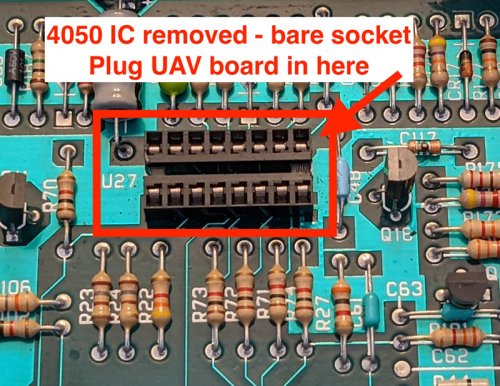 We need to make room for the UAV board to go. Luckily, the chip we're going to remove is (almost always) socketed, making it a simple matter of removing the chip, then inserting the UAV board. If you have a chip puller, it'll make removing the chip pretty easy. Mine was stuck a bit, but a little wiggling back and forth got it to come loose. If you don't have a chip puller, you can use your small flat-head screwdriver to gently lift (a little bit at a time) from each of the ends. You should feel a slight ridge for the flat head to slide under. Take your time. You're not worried about the chip, as you won't need it anymore, but you don't want to damage the socket.

Now simplly insert the UAV board into the empty socket. In the annotated photo, the side of the board with the wires attached will be towards the top of the photo. (You can also look at the photo of the completed board.

If for some reason your 4050IC isn't socketed, you'll need to de-solder the chip and install a socket. That's beyond the scope of this tutorial, but isn't all that hard (and there are plenty of video tutorials on YouTube).

Step 4: Solder the Composite and Luma Wires to the Motherboard 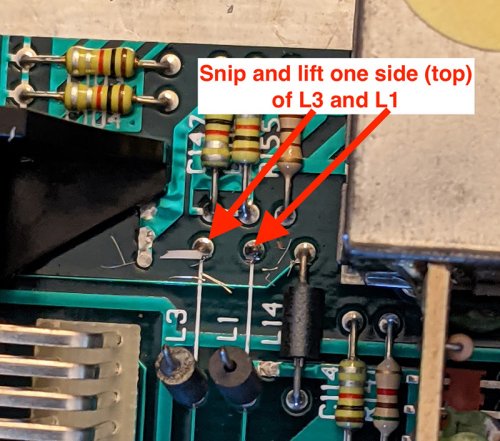 Here's a photo of the wires after they've been soldered to L1 and L3: 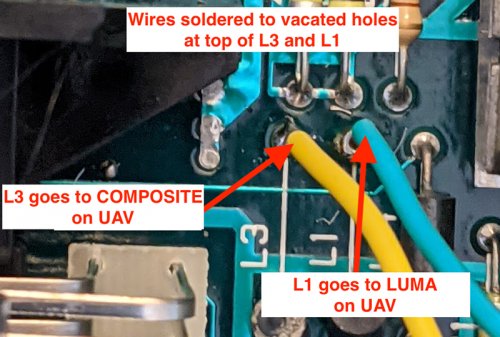 This one is pretty self explanatory. You're not going to solder anything here, but you want to snip and lift the right side of C103 and C104. 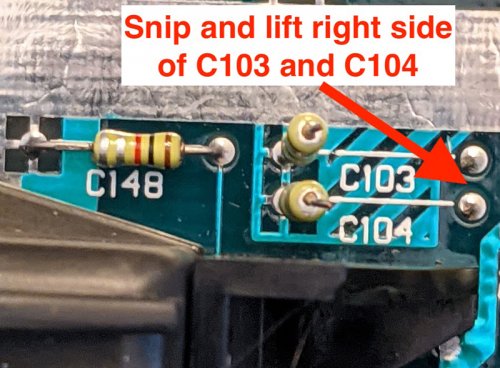 Here are COLOR-IN and GND connected to R74 and R38 respectively: 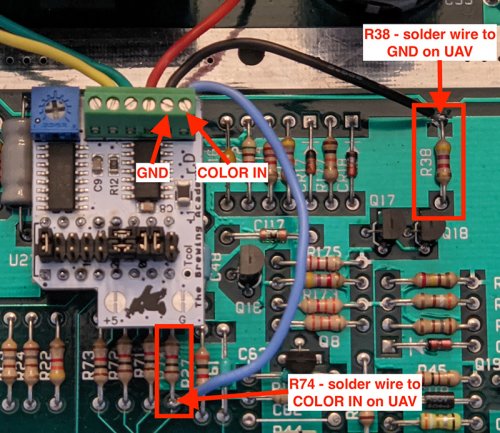 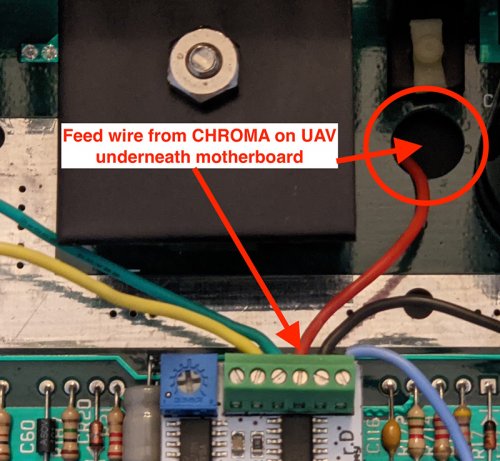 The final step! (Aside from putting everything back together...) We're adding the long-missing CHROMA feed to the monitor port.

Here's a photo of the underside of the motherboard, with the CHROMA wire connected to the vacant pin: 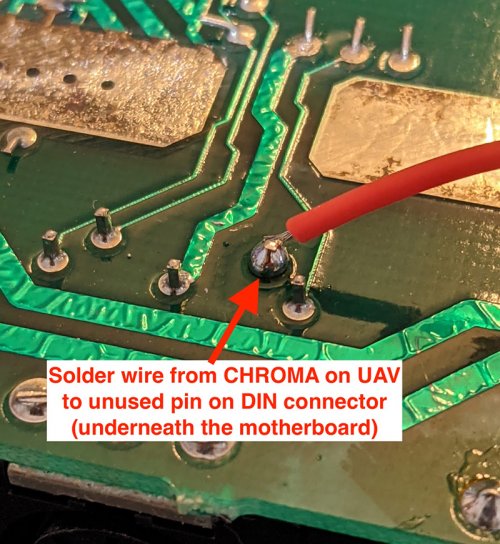 And that's it! You should test everything before putting the 1200Xl back together. Here's mine, showing off the splash screen in s-video glory! 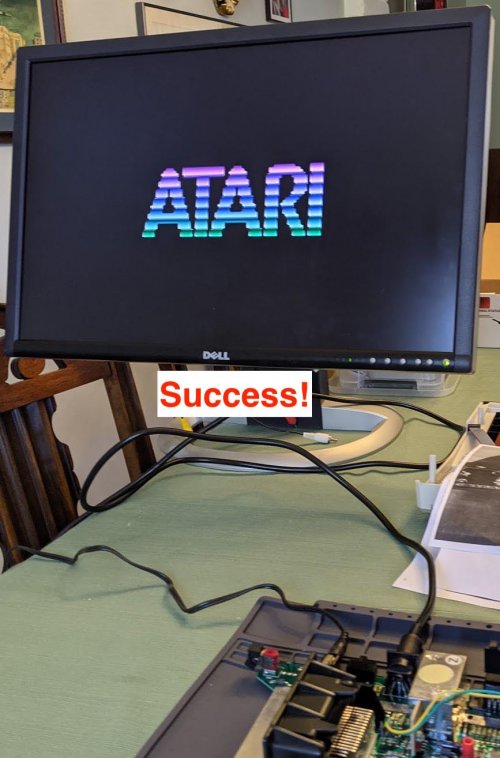 And if you're interested, here's a photo of the completed board.